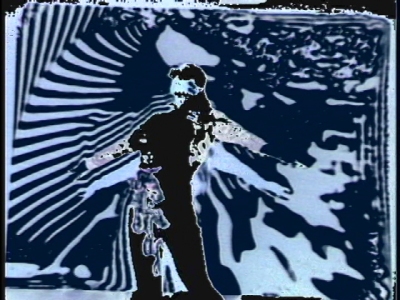 While developing a unified performance ensemble over the past two and half months at High Concept Labs, Vaudeo Motion has also been taking steps to understand our roles and goals as they relate to our audience. In doing so, we keep returning to questions of non-verbal communication and shared experience. What follows is not a manifesto or completely realized thesis on the relationship between abstract performers and their audience, but an exploration of some of the ideas and inspirations that have resonated with us.

“The Electronic Video Synthesizer was created to enhance the interface between the video artist and the people. Each human being is enshelled in his own perception of reality. Rational logical communications have their severe limitations. The communications which take place on the aesthetic abstract level deal with the inner tune of a being. It’s like the DNA code of the artist speaking to the world, since we all perceive different worlds, in the same worlds, it becomes our necessity to find witnesses, when we find the ultimate witness . . we find love. The current trend toward religion and God is in a way a frustrated attempt to find the ultimate witness. One cannot do without a witness. What you see on the screen is my attempt to get a witness deeper into your being.” – Eric Siegel, 1973

Eric Siegel was a pioneering video artist who built his own television set at the age of 14 and went on to invent a video synthesizer and colorizer, which allowed artists to create colors and shapes without the use of a camera, greatly expanding the possibilities of live video composition. Siegel was interested in using video empathetically—to witness and reflect the experiences of his viewers without the use of verbal communication.

Two recent NPR stories explore some of the science behind empathy. They’re labeled under the theme of “entanglement,” a term for the ways in which our thoughts and felt experiences are often much more intertwined with those of the people around us than we might realize. There’s one particularly astonishing tale of a woman who could almost be considered clinically empathetic. Perhaps because she has less gray matter in the part of the brain that distinguishes between self and other (the temporoparietal junction), this woman experiences the physical and emotional sensations of those around her so intensely that it affects her ability to lead a normal life. But all of us experience something like this, if to a more manageable degree, partly due to our brains’ mirror neurons. Mirror neurons are so named because when we watch someone doing something, those areas of our brain that would be responsible for doing such a movement light up as if we, too, were doing it. For instance, if I watch you hug someone, my brain will activate the same hugging areas as yours even though I’m not giving anyone a hug.

The phenomenon behind the hugging example is often referred to as kinesthetic empathy, a concept that dancers and choreographers have been thinking about and working with for a long time. Without delving too deeply into that well, the sense is: if I can trust that my movements are being processed by your system regardless of verbal explanation or anchor, I have access to different ways of sharing my intentions than I would otherwise.

So, how do these things relate to our work at High Concept Labs?

Vaudeo Motion is an improvisational trio with one person working primarily with movement, one with sound, and one with video, to create a unified multi-sensory system. We have set up a series of feedback loops, such that changes in the video, sound, and movement necessarily affect each other in real, physical ways (as well as intentionally, conceptually, and emotionally). We describe our performances as synaesthetic because of the way the system affects multiple senses, and consequently, according to those who experience it, transforms the space and transports them elsewhere. (If that’s all hard to imagine, come check us out in person—details here.)

From what I can tell, there are two things going on with empathy. First, we can feel what others are feeling. Second, we can acknowledge that for each other: we can show our understanding of another’s experience, and, through doing so, offer them some catharsis. Such acknowledgement can happen through conversation, but also through visuals or movement or music or many other pathways. In a performance setting, this means there’s a two-way street. The audience actually feels what is happening to the performers, if only subtly and subconsciously via the mirror neurons. At the same time, the performers can acknowledge and honor a history of the viewers’ experiences through what and how they perform. That’s what Siegel described as creating a “witness” via live video composition, though of course this kind of acknowledgement is what many artists and performers across mediums have sought to offer throughout time. And it turns out that, via mirror neurons and all the other avenues of entanglement, our systems are set up to receive such acknowledgement. It’s as if life interspersed with performance can become a crazy feedback loop itself: We shape each other’s experiences in the day-to-day; that information gets processed and offered back out in performance; the audience receives that offering whether they are trying to or not; once the performance ends, it starts all over again. Or did it ever really stop?

I’ve come to realize that Vaudeo Motion is working within this performative feedback loop—in part because of our personalities and aesthetic tastes, but largely because of the immersive, synaesthetic experience that our intertwined signals create. Is it working? What would “working” even mean? We hope to continue finding out over the next few months.

Resources:
Interviews with Eric Spiegel 1973-1992
A pair of NPR stories from early 2015
Primer on kinesthetic empathy

This is the HCL blog.

This blog is a source for our associated artists and audiences to share the experience of the creative process. Here you will find news, pictures, and video's of the new work created at HCL.